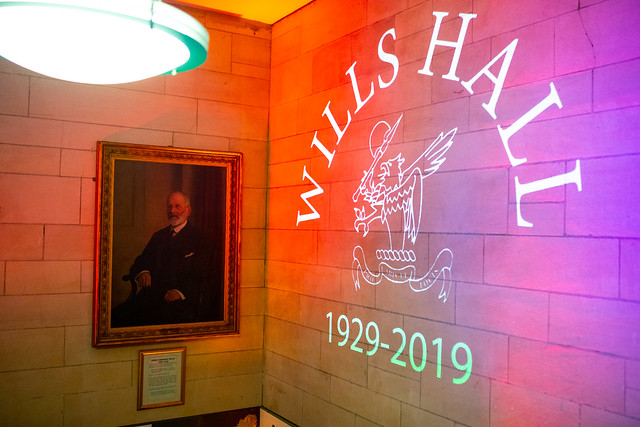 On Saturday 14 December, 200 alumni, current Wills residents and guests from the University and the city, celebrated the 90th Anniversary of the opening of Wills Hall. At 5 pm, David Dewar, Director of Chapel Music and doctoral student, gave an organ recital in the Dame Monica Wills Chapel. From 6-7 pm a drinks reception was held in the entrance and bar areas. The aperitifs included in a specially commissioned anniversary gin, “Old Wills”.

Guests took their seats in the Dining Hall by 7 pm and guests of honour processed into the Wills Hall Fanfare. Brief introductory addresses by the two most recent Wardens, Professors Robert Vilian and Julian Rivers (PhD 2005) preceded dinner, and speeches by the JCR President (1st year law student Terri Boardman), alumnus and Patron Robert Marshall-Andrews (LLB 1965, Honorary LLD 2015) , and our guest of honour, the Rt Honourable the Baroness Hale of Richmond DBE (Hon LLD 2002, Honorary Fellowship 2017), concluded the evening. Entertainment after dinner was provided by the Bristol Hornstars and Michael Richardson from Special Collections prepared an exhibition of archive materials from the history of Wills and the University which was on display in the Michael Wong Pakshong lounge.